VGB wrote:Hats off to you Graeme, I expected more deceleration in the fly leg flight due to drag which shows how little skin drag contributes. We’re you using a fly, if so what was your set up.?

Whilst reviewing the clip for Merlin's request, I saw the fluff was still attached to the leader in this clip. It's only small (hard to see) so I don't think it's having a big effect. Sorry for the error.

Cheers Graeme, it appears that the fly drag doesn't do much either. I guess if it was large, we would have nice taut fly legs every time.

Way back in post #297, Gordy posted a couple of images in which he claimed the loop emerging from under or over a net produced lift or drop, depending on the orientation of the loop. The images were screen captures derived from this video.

I asked him to trace markers on the line because the initial starting conditions of the line in each cast were definitely different and his images were produced in a way that represented them to be the same. He has even labeled both of them to show the initial loop traced path of -5 degrees.

Gordy chose not to correct the error.

These are Gordy's images:

Now that I have some software to trace markers, I can produce the images that Gordy would not produce and correct this obvious error. This first image shows the path of a marker on the fly leg for the loop emerging (reforming) over the net (the upright loop.) 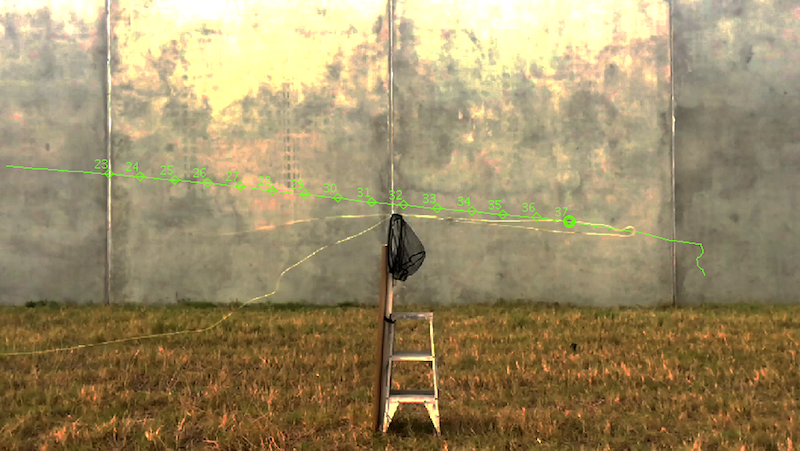 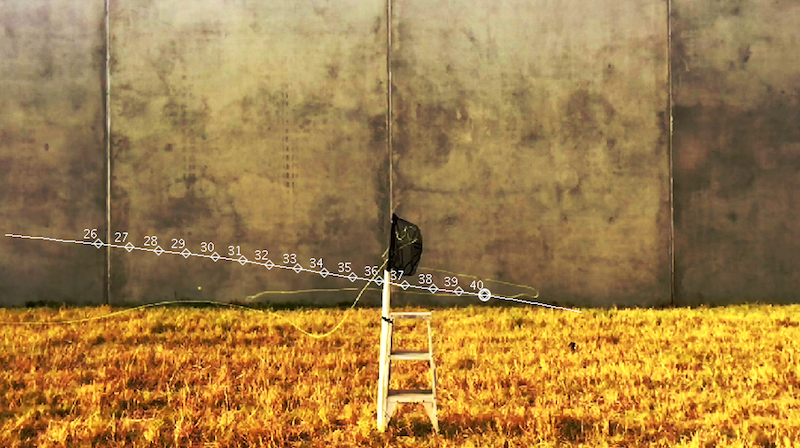 The loop is producing neither lift nor drop in the fly leg's trajectory. The fly leg maintains a steady state of motion unless a force acts on it, as per Newton's First Law of Motion.

* If anybody would like to check my results, I'll send them the tracker files. You'll need to install the software, but it's free and pretty easy to use.
FFi CCI
Top

Thanks for that Graeme, do you have the speed record for those markers? I’m interested to see if the collapse of the loop has any impact at all on fly leg behaviour.

Unfortunately, I have nothing for those particular markers from before their first loops were destroyed. This image is the point in time when the second loop reformed (inverted). The marker seems to have been slowing fast until just before the loop reformed, when it then slowed at a reduced rate. They might have been slowing faster without a loop than with one, but I haven't analysed enough data points to confirm yet. Tantalising, but not enough yet.

Markers on the fly leg before the crash obviously don't carry on beyond the net. They had an average (and slowing) velocity of about 27m/s, consistent with the first part of the graph shown here.

Thanks Graeme, I was hoping to shed light on why a reduction in tension from casting into a headwind causes the fly leg to slow down. I think the loss of tension at the front of the fly leg causes it to go to spaghetti rather than the cast failing being entirely due to drag on the fly leg.

Best get back to tying shit flies to replace the ones stuck in rocks on the river bed.

Something else to test out, I suppose. I don't know if this experiment is close enough to those particular conditions to explain that question. What I can tell you from a LOT of personal experience with strong head winds is that a high line speed with a good focus of direction is the answer to fixing the problem, regardless of the cause.

(For the record, I have just looked at the other reformed loop. The crash of the initial loop didn't seem to have much effect at all on the fly leg.)

Thinking about it Graeme, the fly leg tension is reconstituted in that experiment when the loop reforms which doesn’t happen in a normal cast into wind.

Hello everyone,
after watching these videos on youtube I wanted to ask you experts if you think that this phenomenon can be related to the fact that the fly line seems to defy gravity and stay airborne much longer than we would expect when unrolling after the shot, in particular during a distance cast.
Thanks in advance

I apologize if the video has already been discussed here in the past or if it goes out of topic.
(and sorry for my bad english

Hmmm. Well from that I wouldn't say that they understood it. Ie the top of the slinky has "to send a message" to the bottom of the slinky.

Would it not be that