Covered topics /how it works

For an untethered cast, you have 2 unknowns (legs speed) and two equations (energy, momentum).


Merlin,
Does the drag on the two legs and the loop not enter into your analysis? I would not expect momentum to stay the same since the line has outside drag forces acting on it.


As I said before, the rule of the thumb is that the rollover goes on if rod leg is about 25% of fly leg.

Does that mean when the loop rolls out to the point where the rod leg is longer than 25% of the fly leg length then the tangential velocity of the line going around the loop will start to decrease and eventually kill the turn over?

What determines that 25% factor? looks to me that the rod leg is much less than the fly leg length shortly after the release in Dirk's dud casts. 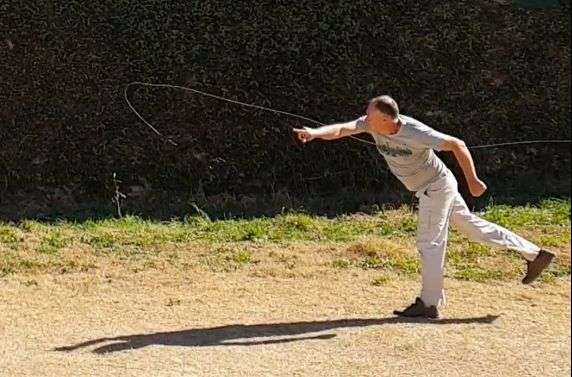 Maybe Dirk can get an estimate of what the relative lengths were at the point of release for the case where the narrow loop turned over and compare it to the lengths for his dud casts.

Since the nominal rho_l*v_tangential\(^2\) tension at the top and bottom of the loop is independent of loop radius why do you think needle nose loops tend to roll out and wider loops do not for non-tethered casts? 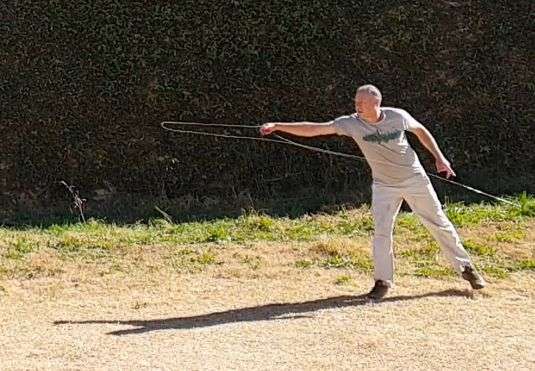 The fly, end of the fly leg, is just out of frame on the right. The end of the rod leg is about halfway between my hands.


gordonjudd wrote: ↑
Tue Aug 11, 2020 3:43 pm
Wider loops tend to stop propagating as shown in your other released casts, so I cannot explain the difference.

File it under the "seeing what you want to see" category.


The last cast on this video

has probably the widest loop of the series and propagated all the way.

I agree with Merlin about the loop size having no influence on tension. I disagree with Merlin though about a required minimum rod length for rollover to "go on". See the cast referred to above, especially at release.


I leave it to the beholder to decide if any rod leg was present and whether rollover went on to the end.

Wow that takes me back, to sitting in a garden with Bruce R and Noel P and discussing this very topic. Noel was of the opinion that as soon as there was a loop formed (untethered) it would/could unroll.

I need to send him that video Dirk. I think he would enjoy it!

Thanks, Paul
It's an exploration; bring a flyrod.

I agree with Merlin about the loop size having no influence on tension.

Dirk,
That is true as there is no radius term in the rho_l*V_tangential.^2 tension equation. Dr. Biggins has noted it also does not depend on the shape of the loop.


I leave it to the beholder to decide if any rod leg was present and whether rollover went on to the end.

This beholder would say the loop made it to the end of the fly leg but it is an example that muddies the water a bit.

For much of its flight the rod leg was vertical and moving so that it had some tension due to form drag. It looks to me that it also made contact with the ground which slowed it down and helped to maintain some tangential velocity to help the loop to keep on propagating to the end of the fly leg.

In cases where the end of the rod leg is free to move throughout it appears to me that wide loops stops propagating and stall out as in this example.

What formed that cast's rod leg in the first place is probably what kept it going too.

The difference between those narrow- and wider-looped casts is that the narrow ones were made by hand hauling, which gave a high initial leg speed difference.

The wider looped (hand casting, no haul) casts with very little or no initial rod leg length all had good rollover early on. And I saw no reverses.

I suspect the stalled casts had much to do with technique - those pesky dangle loops I kept throwing.

Here is a trace of a released hand hauled cast, showing horizontal velocity of the rod leg end and the fly (once it became visible). Initial rod leg length was about 0.8m, 12% of the 6.5m line length (leader included), and 16% of the 5m #5 fly line length.

Note that the rod leg end also accelerates from the captured instant.

Note too that the time scales on the two charts are not in sync.
Top

I did not mention “conservation” Gordy, but in fact the calculation was neglecting the loop and also air drag for easiness. Drag would just delay and slow down the events, increasing the risk of failure. 25% is just an order of magnitude, 20% would be fine (typical of one of Lasse’s tests). My guess was that below 10%, air drag would put all down since the trend was to slow down leg speeds too much in conservative conditions. The lower you go the most difficult it is for the rollover. If you check the rod leg things go better for sure. That study was made two years ago by reference to overhang with shooting heads. The conditions were different from the last one posted by Dirk: there was zero initial speed for the rod leg for calculations. I do not think we can strictly compare hand casting and a simple model on these grounds.

As shown in the above records, the rod leg starts with a positive speed and then slows down before restarting (0.3 s), whilst the fly get accelerates. Unfortunately we do not see what happens after 0.55s for the rod leg: the fly leg is decelerating so the rod leg is still accelerating likely to a peak before dropping down (air drag on smaller diameters). That’s interesting but a bit too difficult to model since both air drag and tapers have to be on board. I have the same problem with the “triple haul”.

By the way, what are we after? It appears we diverge from the initial topic as usual.

I did not mention “conservation” Gordy, but in fact the calculation was neglecting the loop and also air drag for easiness.

Merlin,
With no outside force would momentum be conserved in an un-tethered cast?

I would think that drag must enter into what happens as there has to be something to explain why the needle nose loops tend to turn over with ease while wider loops do not.

I would think the drag forces on the two legs would be oppose the rho_l*V_tangential\(^2\) positive acceleration forces (tension) at the front of the loop. Thus drag (and the relative mass of the two legs) would have an effect on how they accelerate over time.

My thought experiment may not be what actually happens but there must be a reason why wide loops seem to have difficulty in getting the fly leg to turn over before the propagation of the loop over the ground stalls out and falls.


By the way, what are we after? It appears we diverge from the initial topic as usual.

I think we are trying to answer Paul's question about the basic physics of loop propagation.

Q how does a fly loop unroll?
There might be two answers here-
A1 there is a force at the loop front from momentum change that pulls the line
A2 momentum of the fly leg is the driving force of the loop
(I think it’s probably both)

I seem to be the only one who thinks A1 is a sufficient answer and think that examples of line flight with no loop, non-tethered loops, and tethered loops should help to give enough data to resolve the question.

I hope that with enough examples we can reach a consensus on resolving the A1, A2 (or both) answers that explain why the loop is able to resist drag forces and continue to propagate to the end of the fly leg in a normal cast.
Gordy
Top

Here is a trace of a released hand hauled cast,

Dirk,
Now we are getting somewhere.
Could you use tracker to get similar data for one of your thrown dud casts as well.