Just because the weight on the fixed line had the positional lead before the bricks hit the floor doesn't necessarily mean it was the one travelling the fastest at the time. Very hard to determine without some sort of accurate velocity measurement.

It was the brick on the table that had the lead, didn't look at the falling weights, those wheren't the interesting part

I was talking about the two masses on the table. I should have said 'one on a fixed line' and one incorporating a spring.

I was once sat at the traffic light in my home town with a police car behind me. I accelerated off in my usual, slightly heavy right footed, way. I got to 30mph, backed off and maintained that speed. A few moments later the blue lights came on and I was pulled over. The police woman accused me of doing 50 mph in a 30 limit. I explained to her that she was the only one who was speeding, as she did 50 to catch me up, but I never exceeded 30 (and she never overtook me). Luckily she was then called away, because she wasn't buying it at all

Does that make sense?

My way of looking at this therefore, is that a rigid rod is limited purely by how quickly we can move our arms, whereas a flexible rod is limited by how much force we can apply. Speed vs Strength. Does this make any sense in engineering terms or is it bollocks?

It still means that for a period of time you where travelling faster than the police car. Same as with the bricks, without the spring, it's your heavy foot, and it goes of faster in the beginning, the spring attached brick then has to speed up further to overtake, just like the policecar, but the first brick isn't maintaining speed, but slowing down, so it doesn't need to get over 50 to overtake

I've been thinking about it in terms of momentum. The momentum of both systems is the same at the beginning of the experiment. Imagine we threw the two systems through the air with the same force, I think they would both travel at the same velocity, measured at some fixed point in the system. The difference is that in all likelihood the system with the spring would be oscillating whereas the other would not be able to. But fundamentally they would both arrive at a fixed point at the same time if you measure it at that fixed point within each system.

I think the same happens across the table, if both the table and the drop are sufficiently long. One system oscillates and one doesn't but fundamentally they both travel at the same velocity.

If this is accepted, the bricks and the weights of each system must be travelling at different velocities most of the time (although there are times when they are equal - like the broken clock that is right twice a day).

If the weight on the spring hits the floor at this time, the brick is traveling slower. The brick on the string will travel further.

We have taken more momentum out of this system because we have stopped the weight when it was travelling faster than the weight on the string, leaving less momentum in the remaining part of the system, the brick.

This way we take less momentum out of the system with the spring. The brick on the spring is moving fastest and wins in the speed/distance competition.

Paul mentioned about the trade off between speed and strength. I think this is an issue too, but I don't think we've got to far as considering this yet. But I am looking forward to that when we get there

My layman's idea for a Friday afternoon. I doesn't seem to work exactly because in Merlin and James's graphs the velocities of the bricks and weights are not quite in the phases I expected but it seems to be quite a small timing difference.

Lasse,
This result is confusing is because we are looking at the difference in the instantaneous vs the average velocities of the brick. We are used to situations where the velocity of an object has a constant value and thus over a fixed length of time the object with the faster velocity will cover more distance, i.e. d=v*t.

However at a more fundamental level the velocity of an object will depend on the integral of its acceleration curve and its distance will depend on the integral of its velocity curve. Those integration can produce some non-intuitive results for non-constant or non-linear acceleration vs time curves. That is what is happening with the acceleration force applied to the brick using the spring or in Jame's "racing cars" example. Unless the cop that stops you was a physics major, good luck in explaining the integration of acceleration vs time curves to get out of a speeding ticket.

To get a better understanding of what is going on and why even the lead mass has different velocities when it hits the ground take a look at is free-body diagram using Aitor's mass values of .05 kg for the lead mass and .01 kg for the brick. 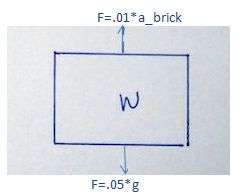 For Aitor's mass values that calculation shows the net acceleration of the lead mass will be -8.17 m/s. instead of the -=9.81 m/s.^2 rate it would have had without the brick.

With the spring the acceleration force on the brick will be zero at the instant the lead mass starts to fall, will reach some maximum value when the spring is stretched its maximum amount, and then will return to zero when the deflection in the spring goes to zero. You (or more likely Merlin ) can determine the stretching in the spring with the use of a second order differential equation that is related to what goes on in a simple harmonic oscillator.

I have given up on trying to explain that because of the way a SHO operates, the maximum spring force is twice as large as the force the constant force in the string for a spring value that is properly matched to get a loaded SHO frequency that is matched to the acceleration time. But if you try to understand why the mass overshoots its equilibrium value when it oscillates in a SHO you can start to see why it also produces that force doubling effect.

Until you do the calculation for yourself (such as James went to the trouble to do) then you will have to take it on faith that the comparative force on the the brick with the string and the spring works out to look like this for a 2 meter drop and a spring value of .295 N/m using Aitor's mass values. Time is running from right to left in this plot (since the lead mass starts at a 2 meter height) so the break in the slope in spring force curve corresponds to when the lead mass hits the ground. 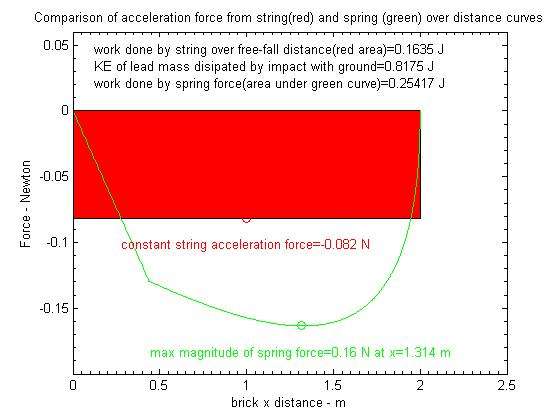 The work on the brick is related to the area under those curves, so I think you can see the area under the green curve would be larger than the corresponding red area for the constant string force. More applied work means more energy applied to the brick and thus it will also have a higher launch velocity when its crosses the 2 meter finish line and sails off the table.