This is where your experiment will start to depart from a fly cast because the Dynamic Amplification Factor of 2 is true only for suddenly applied forces. For a gradually applied force such as a fly cast, the amplification factor is less than 2 and related to the rise period.

Vince,
What is your Dynamic Amplification Factor and how do you computed it?

What do you mean by the rise period of the applied acceleration? Don't you think the time it takes to go from no rotation to some significant angular acceleration level in a fly cast would be much less than 1./( loaded frequency) of the rod and line? That was certainly the case in the Paradigm cast.

Once you have a better understanding of Merlin's model I think you will find the match of the rod's spring constant to the magnitude and duration of the positive and negative acceleration phases of the cast will have much more of an effect on the peak amplitude produced by the deflection in the rod as opposed to some relatively short "rise period". Think about energy. There is not much energy in a short rise period, so how much effect could it have on the ultimate work energy produced on the line?

The SHO model that I use does not require a "sudden" applied force for the acceleration of the butt but uses measured ones calculated by taking a derivative of the angular velocity data from the casting analyzer or digitized high speed videos. For example the delayed rotation that Paul uses in his distance casting has a very slow increase in the angular acceleration at the start of his cast. The torque applied to rotate the butt in that cast varied smoothly with no "sudden" jumps in the resulting angular acceleration but Paul still reached very high acceleration levels by the end of power application phase of his cast. 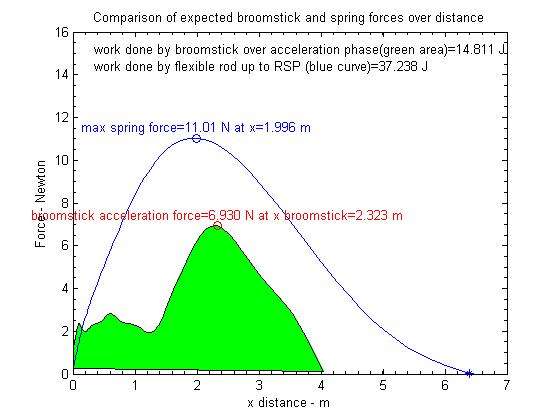 As noted in that thread,

The damping you get in an actual spring means that you never get to a factor of 2 difference in the maximum applied force, but whatever the value I think the increase in the applied force you get with a spring will be significantly larger than it will be with a broomstick. The relative maximum force applied to the line in Paul's cast was more like 1.6 than the factor of two you would expect in a SHO, but it was still significantly larger and the distance that force was applied over the rod's tip path was significantly longer as compared to a rigid lever. As a result the line speed expected with the rod was much higher (50 m/s) than the line speed expected for a broomstick (32 m/s) as shown in the plot below. 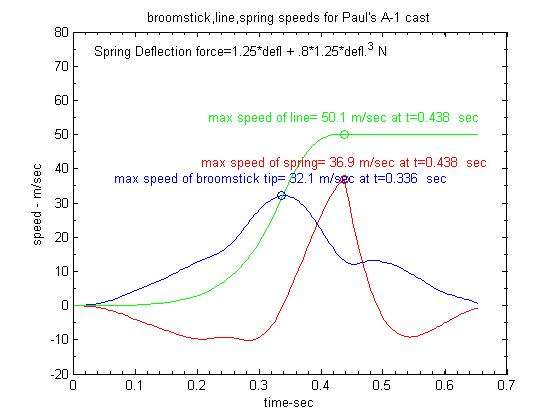 since the falling weight exerts the same force,

The retarding force being applied to the falling lead mass is much different with the spring than it is with the string. The acceleration force of gravity on the lead mass is the same in both cases, but that is only half of the story as you can see from its free-body diagram.

since the falling weight exerts the same force,

The retarding force being applied to the falling lead mass is much different with the spring than it is with the string. The acceleration force of gravity on the lead mass is the same in both cases, but that is only half of the story as you can see from its free-body diagram.

I can hold that weight with my bare hand: its acceleration is zero but the force it is exerting on my hand is the product of its mass times acceleration of gravity.

Aitor,
That is true, and as the free-body diagram for the falling lead mass shows the force pulling down on the lead mass in your experiment is equal to that .05*g weight factor (.49 N) and it never changes as the mass is falling. But what about the force from the string (or spring) that is pulling up on that mass? In your static scenario, if you pulled back on the the brick with some force don't you think that would reduce the force from your hand required to support the lead mass by the same amount?

Looking at the free body diagram I think you can see that is not the case if you accept Newton's third law (and I know you do).

The bigger that force is the more it will reduce the acceleration of the falling mass. You can see from the impulse plot that force is much larger when a spring with the optimum spring constant is pulling on the brick than it is with a non-extendable string. Thus the downward acceleration of the lead mass will be slowed more with the spring than it will with the string. That means it will have a slower impact velocity and thus a smaller KE loss when it impacts the ground.

Unfortunately most people do not understand the overshoot you get in a SHO when its mass is offset from some equilibrium position. In fact with an optimum spring constant that force can be nearly twice as large as the force you would get for a rigid connection. You also need to be able to see than when the spring-mass system is being accelerated that equilibrium position is no longer zero, but is equal to x=(m*a)/k where a is the externally applied acceleration, m is the brick mass, and k is the spring constant.

With that fact in mind, here is trick question that Grunde answered in his original discussion of the SHO model. Note: the answer to this may come as a surprise to "pre-load" advocates.

If you set the initial deflection of the .295 N/m spring in your experiment to .27 meters prior to releasing the lead mass, how much difference would there be between the retarding force produced by the spring as compared to a string connection while the lead mass is falling?

Gordy,
I can't reply to your question, I am a total layman so I am totally in favor of clear concepts instead of complex calculations which I can not understand. For instance, if I wanted my whisky cold I would ask the bartender "some ice, please", instead of "some H2O in solid state, please", both are correct but...

I understood that the spring delays the fall of the weight, resulting in a higher impulse value due to the the longer time the force is acting, right?
Moreover the force applied by the falling weight on the brick by an inelastic connection is increased by the interposition of a spring, right?

So the adavantage is double: more time for the force to act and a higher force applied to the brick on the spring?
Top

Yes it´s correct and the outcome varies with the parameters of the experiment. It will be interesting to see how the various elasticity of your "springs" affect the results of your experiment.

So the advantage is double: more time for the force to act and a higher force applied to the brick on the spring?

I am totally in favor of clear concepts instead of complex calculations which I can not understand.

In that regard, that is why I like the simplicity of force over distance energy concepts as most people can readily see the difference in the area under the force over distance curves with the string as compared to the one for the spring. I hope those curves help to provide the simple "ice" you are looking for.

In you experiment since the deceleration time is so short the distance the force is applied is the same with either the string or the spring. Thus it is the added force provided by the overshoot of the deflection in the spring that accounts for the applied work energy (or the impulse area if you prefer to think in variations with time) difference in your experiment.

If the spring starts out with an initial deflection that equals equilibrium position set by the mass of the brick and its expected acceleration then "theoretically" there would be no change in the deflection of the massless spring as the lead mass falls. Therefore, In that very special case the spring would provide the same acceleration force on the brick as the string as the lead mass falls as shown in the comparative impulse plot below. That shows how important the overshoot of the deflection of the spring that happens in a SHO as it recovers from an offset in its equilibrium position is to producing higher line acceleration forces in casting. 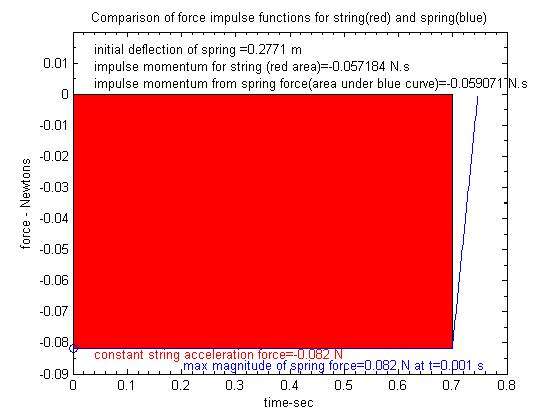 The above result shows that having some initial deflection in the rod at the start of the cast would tend to decrease the launch velocity of the line not increase it as proposed by advocates of "pre-loading" the rod.

In this case (where the deflection in the spring started out at its equilibrium position), the only speed advantage provided by the spring would come from the relatively small amount of its initial PE (.011 J). You can see the resulting launch velocity for the spring would only be 5.9 m/s vs 5.7 m/s with the string. A big difference from the 7.1 m/s it would be expected to have with no initial deflection.

Why don't you connect both bricks to the same weight to have equal force?
Top

Why don't you connect both bricks to the same weight to have equal force?

Crunch,
Equal force on what?

That would provide an equal force to the lead mass end of the spring, but it would not provide equal forces on the two bricks you would use in that form of the experiment.

The use of a single lead mass would still produce a speed advantage for the brick connected to the spring but the difference would not be as big as in Aitor's implementation of the experiment. With a single mass the same amount of energy would be lost to the system when the lead mass hit the ground. That would leave less energy that could be used to speed up the velocity of the brick that was connected to the spring.

Earlier here or in old forum thread for someone it was important to have same force input.

Actually I don't know what you are trying to solve here?

Is there someone who does not believe that when spring is "in tune" with weight and brick it isn't more efficient than plain string?

Or when the tune is completely wrong the system oscillates?

Or when spring is weak it becomes less efficient?