Lasse,
Thanks for measuring the spring constant of your rubber band. In order to get a more dramatic difference you need to find a much weaker one or put three or four of the ones you are now using in series.

Here is the force vs deflection curve for your measured values. Unlike a fly rod it appears to be a "soft" spring in that the force required to get an additional amount of stretch decreases for larger force values. 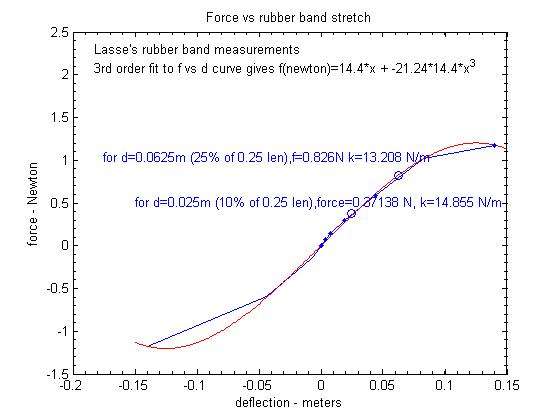 You can see that the loaded frequency of that rubber band and .028 kg brick mass is much to high to optimize the added velocity you would get for a softer spring. With a softer rubber band you could get a higher brick velocity for your .56m drop of the .075kg lead weight as shown below for a spring constant of 2.4 N/m. That softer spring would get close to getting the 2:1 improvement in the maximum applied force with the spring as compared to the string as shown below. 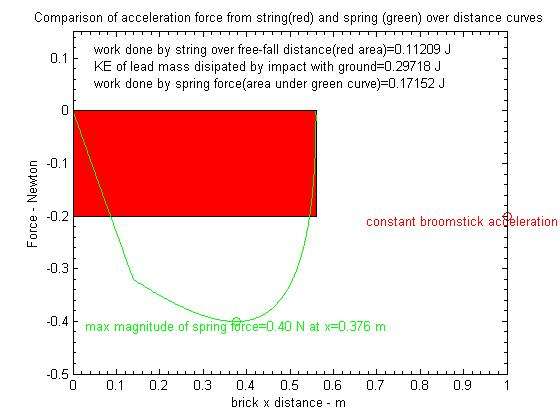 Thanks for sharing your implementation of the experiment.

Under normal conditions with average rods, no, this cannot happen. I’m not sure to understand the second sentence: the deceleration just follows the maximum rotation speed and the change in torque.


I don't believe that all the elastic energy contained in the spring is given back to the line, never have. How much may be a matter of debate but it a debate that I'm happy to sit back from.

A few tests indicate it all goes in the counter flex in normal conditions (that will be different for a noodle or the broomstick; some remaining kinetic energy could step in).


Hurrah....no idea about the percentages but, apart from that, totally agree....could you please explain what you mean by the non-linearity of the rod, just so that I can be sure we that I am thinking about it in the same way.

The non linearity of the rod is a characteristic measuring the stiffening phenomenon as load increases. If you followed some of the other threads about non linearity it is the K3/K1 coefficient of the relationship of stiffness coefficients in: K (stiffness) = K1 (linear stiffness for small deflections) + K3 (deflection squared). Non linear rods stiffen very significantly, while at the other end of the spectrum some rods can remain nearly linear. I cannot find simple words to explain that today, I have to think about it, but the more non linear the rod is, the larger the relative deflection is for maximum line speed conditions. Does it speak to you?

basically, could the maximum rotation speed occur anytime prior to a deceleration, a reduction in torque ?

Mark,
I assume you are talking about the angular velocity of the butt rotation during the forward cast with this question.

As you know the angular acceleration of the butt depends on the effective MOI of the rod and the line and the torque applied to rotate that rod/line combination. The source of that torque could be from any rotating joint, so it could come from a combination of rotation torques coming from the torso, shoulder, elbow, or wrist. That mix of rotation sources complicates calculating the effect MOI about some varying center of rotation but as long as the net applied torque is positive the angular velocity will increase. Thus a reduction in torque would still result in a positive increase in the angular velocity since the angular acceleration value would still be positive.

Very happy with those comments Merlin, thank you.
Casting Definitions

Many men go fishing all of their lives without knowing that it is not fish they are after.
Top

My model says you should use a 2.2 N/m spring (or 2.2 grams / cm if I do not fool myself) to maximize the differences in speed and displacement (close to Gordy's value, it is just a quesion of slight difference in inputs, exact or rounded mass values). If you cannot change the elastic stiffness, then you have to raise the masses to impractical values: ten times more for the brick and five times more for the falling weight.

Lasse,
Can you video the rubber band in your set-up to measure its stretch variations while the .075 kg mass drops?

Unlike a fly rod a rubber band is a one way spring. I.e. it has a f=-kx force vs deflection characteristic when it stretches, but it takes no force to compress it. That is different than the ideal spring model used in the SHO model, and thus our simulations only apply when the elastic has some stretch. Thus the predictions of the model would make sense for a spring constant around 2 N/m, but not for the much stiffer spring you actually used.

In reality I would not expect the multiple cycles of ripple in the brick velocity to actually happen since the rubber band can pull on the brick, but it cannot push on it to slow it down. Thus it would help if we could actually see what happens with a real world spring.

How did you embed your Vimeo video in your post? That is a very useful tool to see what is going on without having to open up a Vimeo window.

Thanks again for having the interest to run this experiment.

Fortunately, it appears you did take the time to do the experiment, and from your description have shown results that exactly mirror Merlin's predictions. The fact that you see the brick mass hitting the ground further away from the end of the table indicates that it had a higher velocity with the spring than it did with the string. I would be scratching my head if the experiment did not turn out that way.

Gordy,
I understood that different spring stiffnesses could give totally opposite results. So without knowing the stiffness of Lasse's rubber band, the result was clear for you?

I will try to shoot some video by next weekend. I will use a marble and a weight of some sort, also a conventional rubber band. I thnk I have a sort of very long table to measure exactly how much distance each marble covers. So my question again: Will the marble spring/combo always cover more distance than the marble/string combo or not?
Top

Will the marble spring/combo always cover more distance than the marble/string combo or not?

It is great that you can see this difference because the spring will still be deflected when the lead weight hits the ground. However, when the spring deflection returns to zero (at the maximum launch velocity point) the brick will also have traveled the same distance as the falling lead.

I know that you are focused on distance because that is something you can easily see in a video, but from a work energy standpoint distance is only half of the story. The force applied over that distance is equally important to impacting the launch velocity of the brick. In the case of the spring connection you could estimate the acceleration force on the brick by measuring the stretch in the rubber band while the lead mass falls. If you measure the distance the brick travels while the rubber band stretch goes from zero at the start to zero at the launch point, that distance should nominally equal the distance the lead mass falls assuming the friction forces opposing the acceleration force of spring on the brick can be neglected.

As Merlin explained when casting with a flexible rod, the positive acceleration force will be applied over a longer distance than it would be with a broomstick rod because the rod butt continues to rotate forward while rotation is being decelerated. With the falling lead that deceleration time is very short because of the sizable impulse force that happens as the lead hits the ground. Thus there is no additional distance traveled (aside from a small dent in your floor) in the lead mass as it rapidly decelerates to a zero velocity so the distance the brick travels while there is some stretch in the rubber band should be equal to falling distance.

Since there is some deflection in the spring when the lead hits the floor, its PE will also add to the launch velocity of the brick by the time its stretch returns to zero. Thus the final launch velocity in Merlin's plot was around 6.2 m/s.


I understood that different spring stiffness-es could give totally opposite results. So without knowing the stiffness of Lasse's rubber band, the result was clear for you?

You are correct that the difference the model shows for Lasse's actual spring constant value was predicting a small advantage for the spring so I was jumping the gun. However, Lasse's description that there was some stretch in his rubber band when the lead mass hit the floor (i.e. the spring-driven brick had traveled a smaller distance) and the spring driven lure hit the floor at longer impact point is just what Merlin's model would have predicted. A good example of me accepting data that fits with my expectations.

So my question again: Will the marble spring/combo always cover more distance than the marble/string combo or not?

A very stiff spring would produce the same results as the string driven case. A very weak string would still add to the launch velocity, it just would not be as big as the improvement you would get with an optimum spring.