Aitor,
I do not understand why you keep revering to relative distances, especially since the distance force is being applied to the brick in you experiment is the same whether or not it is being pulled by the string or via the spring. Can you see from this force over distance plot that the force applied with the spring is different than it is with the spring although the distance those forces are applied is the same as the dropping distance of the lead mass in Lasse's experiment with a 2.4 N/m spring? 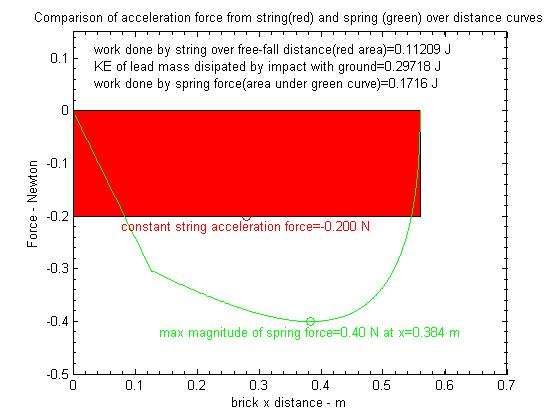 Since the area under the green curve for the spring is larger than the red area for the string, the work energy applied to the brick will be larger with the spring and thus it will produce a larger launch velocity.

What I would suggest is that you measure the velocity of the brick as it passes a point that is equal to the dropping distance of the lead mass from its zero velocity starting point. Tom's timing lights would be a neat way to do it, but you could also use Tracker to analyze a high speed video as Alejandro is very adept at using it for velocity analysis.

As Lasse did you could also measure where the brick hits the floor to get an ideal of which case had the higher velocity. In that case I would make the edge of the table close to that .56 m launch point so that friction losses would not have any time to reduce the launch velocity.

Thus measuring that distance should be easy to do for the velocity differences we are talking about. Hats off to Lasse for coming up with that simple impact distance criteria.

Aitor,
I do not understand why you keep revering to relative distances, especially since the distance force is being applied to the brick in you experiment is the same whether or not it is being pulled by the string or via the spring.

Again.
The brick (or marble, which is what I probably will use) is a simile of a fly line. Right?
The weight driven by gravity is the caster. Right?
The spring is a bendy rod. Right?
The inelastic string is a rigid rod. Right?

So I will ask again:
What is you predicition for the result? My feeling (probably wrong, but my feeling anyway) is that, when the cast is finished, the marble/spring combo will never cover more distance than the marble/string combo. Take notice that I say "when the cast is finished", not when the weight hits the ground but five minutes later so to speak. Both marbles will cover, more or less, the same distance but I don't expect to see any advantage for the spring in any case.
Do yo expect an advantage for the spring in all cases?

Again, a HS video can not show energy, work or any other thing, it can only show visual clues. And the visual clue that anybody expects from a model that states that a spring has a mechanical advantage is to see that the marble attached to it has gone a longer distance than the other one. Right?

Are you going to supply the figures that are needed to model your experiment, masses, spring constant, drop height etc?

If the marbles cover the same distance, it will tell that the spring was not adequate. Just like a fly rod, you know, if the stiffness is not within a reasonable range, you have difficulties to cast the line.

I have the same question than James, since it will allow to compare with model(s).

Merlni
Fly rods are like women, they won't play if they're maltreated
Charles Ritz, A Flyfisher's Life
Top

So my question again: Will the marble spring/combo always cover more distance than the marble/string combo or not?

A very stiff spring would produce the same results as the string driven case. A very weak string would still add to the launch velocity, it just would not be as big as the improvement you would get with an optimum spring.

So back again to the question I posed yesterday. Gordy said A very stiff spring would produce the same results as the string driven case. A very weak string would still add to the launch velocity, it just would not be as big as the improvement you would get with an optimum spring.
And that implies that the spring will always have an advantage, and that is not what you are saying.

I will give data when I have the materials. Anyway I don't know how to measure the spring constant of a conventional rubber band used in any office.
Top

It is all a matter of numbers, what do we call weak or strong if we speak about spring stiffness? I do not understand Gordy's statement as "the spring has always an advantage", it could just be negligible.

Cool table you have

Looking forward to seeing the clip

Aitor,
I hope you have a long table for that implementation of the experiment.

I keep referring to the relative distance the brick has traveled when the lead hit the floor because that is the impression you gave, and when Lasse answered that:

The brick without spring has covered more table when the weight hits the ground...

You did not come back and say, "That is not the distance I am talking about. I mean the total distance they have traveled when they come to a stop on the table."

As far as the model is concerned the distance they would travel on the table would never end since there is no friction. So at least in terms of validating (or disputing Merlin's model) measuring a stopping distance does not make any sense. I tried to point that out to you in the other thread when you noted:

I see in the distance vs. time graph that when both bricks stop at t= 1.6

I think that 1.6 second value is the point where Merlin stopped his calculations not where the brick came to a stop in those two cases. Since there are no losses, they would continue to travel with the maximum velocity produced with the string (5.1 m/s) or the spring (6.2m/s) connections for all time after their launch.

But I guess that did not get through to you since you are still thinking about doing the experiment that way.

However, measuring the impact distance the marble travels as it falls from the table does make sense and I think is a simple, direct way to see the difference in the launch velocities. You may need to come up with some sort of hook and loop arrangement so that the marble disengages from the pulling string as it falls, but I think something could be worked out so the marble is not entangled by the string or spring as it goes through the free-fall path to the floor.


And that implies that the spring will always have an advantage,

If you consider the fact that a stiff spring producing the same velocity as a string is an advantage I would agree with that statement, but as Merlin noted same=a negligible advantage.

Anyway I don't know how to measure the spring constant of a conventional rubber band used in any office.

Just do the same thing as measuring the spring constant of a fly rod. Hang a bag from the rubber band, and note the deflection or strech you get for different numbers of coins that have a known mass. I will be glad to work out the spring constant value for you as I did for Lasse's very stiff elastic earlier.

Lasse Karlsson wrote:Cool table you have

Looking forward to seeing the clip