There are technical reasons which can justify the current confusion about fly lines numbering. The original table, created during early 60s is no more completely followed by manufacturers (e.g. a #5 line is quoted at 200 grains instead of 140 grains – Rio In touch outbound short). Many people blame manufacturers but let’s see why this has likely happened.

Interesting, since the jump in weight of lines didn't follow stiffer rods, but was a sales pitch for a certain brand.

It’s a very odd situation and completely backwards. Putting a heavier line on a rod that is too stiff is fine but not ideal. Better would be to buy the line weight that you want and then if you need a softer rod is to buy a rod with a lighter number.

There is a material issue behind that, carbon fibers modulus can be varied, but not continuously (M33, M35, M40, M44, M48, M55, etc...), and there is a compromise to be found to match an objective. The upwards shift of the line scale is also the effect of a longer/heavier carry for very fast rods. On the paper you can find material characteristics that would fit your goal for speed, keeping the same line scale, but unfortunately, you will not find for sure the material combination to match that objective. And today you may not find the line (who is producing a true WF15?). 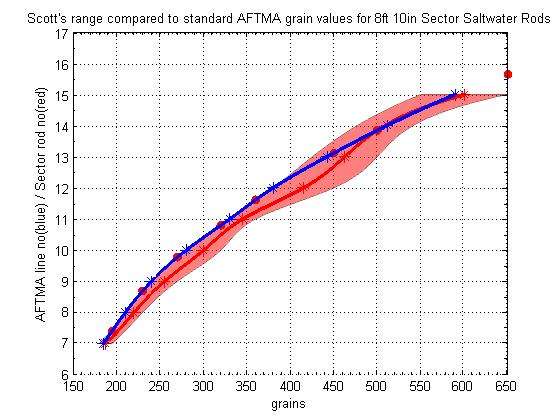 Yesterday I linked to a page Steve Parton wrote for us 10 years ago! http://www.sexyloops.com/sparton/rodrating.shtml I found it interesting to reread to see how he cast rods - ie without double hauling and trying to cast as crappy as possible

Merlin
Fly rods are like women, they won't play if they're maltreated
Charles Ritz, A Flyfisher's Life
Top
Post Reply
7 posts • Page 1 of 1