Re: The Whip Effect

I used the 2D model to simulate Gordy’s cast with no line. I took known characteristics of the rod (stiffness, speed, mo) and chose a medium action type of rod to characterize non linearity and rod action (bending pattern as a function of load and pull angle). When looking at the video, it is obvious that there are several bending modes involved. In the following picture, one can see two parts of the rod bending in a different direction, and this is the mark of the third mode. So in practice, this rod responded with its three first modes.

Thanks to Gordy, I had sufficient data to rather closely model the input of the cast, including hand path, and could compare records with the model output. Tip path record shows a wavy aspect due to the higher modes influencing the rod bend, and these waves appear all along the cast. The cast is made of a relatively slow start followed by a drastic impulse which makes the rod bend deeply on the effect of its inertia. This impulse can reach the rotation speed of a competition cast (1000 deg/s approximately).

The main features of the cast are there, but none of the higher modes since the model is by construction unable to find them. Maximum speed of the cast is slightly above 60 m/s,close to Gordy’s measurement, and cancelling the inertial effect drives this speed down by more than 25% which is huge. This impulse influences the beginning of the tip path with a large dip in trajectory (just as the impulse comes in). I stopped the curves at RSP2 for the model. I added some dots on the graphic to give a time scale: each “step” represents 50 ms.

I currently use two damping functions, one before RSP1 and another one after. They are simple functions linked to speed. The model is in advance from the data up to RSP1 (yellow square vs orange circle), which may be relevant of the lack of representation of the current damping model: instead of speed it should involve square of speed (air drag on the rod). After RSP1 this is of less importance, I use nearly the same damping constrain whatever the rod is in that case. I tested a complicate approach with the 1D model, which implies a “spring & damper” device made of caster’s arm (inertia, stiffness, damper), rotating around the elbow. The test was successful with the 1D model (nice rebound), but this is of little practical interest (at least up to know). I shall concentrate on pre RSP1 motion and I have an idea of how to handle the air drag due to the rod. This no line cast is ideal for testing air drag on rod only. Adding air drag effects of the line afterwards does not appear to be too difficult. So I hope being able to answer Bernd’s question about line effect on the cast one of these days.

Re: The Whip Effect

Maximum speed of the cast is slightly above 60 m/s,close to Gordy’s measurement, and cancelling the inertial effect drives this speed down by more than 25% which is huge.

Merlin,
I am impressed with the match of the tip path predicted by your model with the measured data.

Here is the video of that cast which marks the tip path with white dots. The green dots show the expected tip path for a stiff broomstick. The red lines shows the perpendicular deflection of the tip. With no line the deflection at MCF was a little bigger than the deflection around MAV.

The predicted max tip speed in your model was very close to the measured value of 60 m/s as shown below. Impressive! 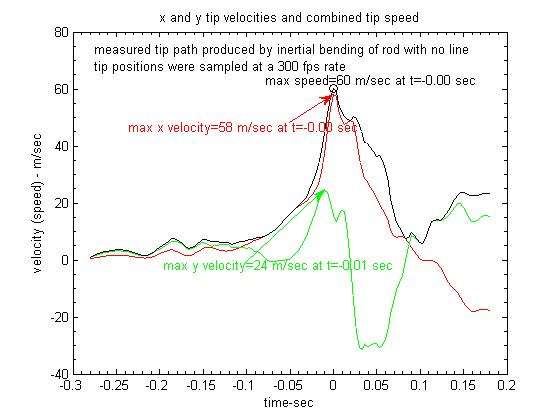