Both heads are identical RIO Scandi taper shooting heads.
The head with the orange fly, is attached to the shooting line the wrong way round.
Fly Casting Definitions
Top

On my iPad I can’t tell which is the orange fly. Can you give us a clue?

"The only advice it is necessary to give the angler… is to avoid any approach to foppery, as trout have the most thorough contempt for a fop…”
WC Stewart
Top

The head with the orange fly, is attached to the shooting line the wrong way round.

Lee,
I cannot see the orange fly in your video.

In the frame grab below is the narrow loop that is lagging behind the wide loop for the head turned the wrong way around? Thus it has a big acceleration at the end of the cast when the thick portion of the head starts going around the loop? 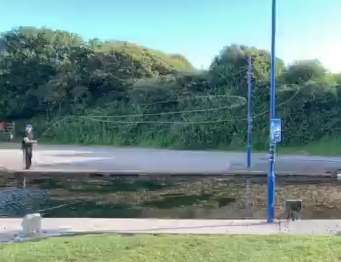 This was exactly the experiment I was hoping Paul could video. What is its the frame rate? Thanks for sharing it.

Did you have any overhang with a length of running line or were just the 31 foot heads outside of the rod tip in these casts?

Both heads are 39ft long with and addition of approximately 9ft of 1mm coated running line attached to the front and then a 6ft section of mono to the fly.
There was approximately 2ft of shooting line overhang
Fly Casting Definitions
Top

Again, an absolutely awesome video Lee. These casts clearly show the effect of taper design on a line.

+1. Thanks Lee. Very useful.
And btw particularly liked the roll cast one too. Interesting comparison with the overhead.

Excellent video mate! That’s much clearer than anything I’ve filmed!

Ok I posted some of these questions to Josh Jenkins and Bruce Richards at SA. Josh is Bruce’s successor.

I can have a go and Bruce can correct me where needed. To start, let’s take air resistance out of the equation. Obviously, air resistance is significant but it’s easier to illustrate the point without it. The energy of a moving object is called kinetic energy and is governed by this equation: Ek= ½ mv^2 (m=mass in motion, v=velocity). The potential energy stored in a bent rod is transformed into kinetic energy in the line.

Imagine that a fly line traveling in a loop has two separate mass sections: the first is mass that is no longer moving (the bottom leg) and mass that is still in motion (the top leg). As the loop unravels, mass is transferred from the top leg to the bottom leg as the top leg gets shorter. So assuming we don’t lose any energy, according to the kinetic energy equation, as the mass in motion reduces, the speed goes up exponentially!

Now imagine that we use the taper in the fly line to control the rate at which the mass of the line is transferred from the top to bottom leg. By pushing mass towards the front of the line (short front tapers, large tip diameters), we can slow down the speed at which the line turns over. Conversely, if we push mass towards the back of the head (think triangle taper) we can cause the loop to unroll much faster for the same total line weight and input energy.

Does this all make sense?

That certainly covers the physics! When Noel explained all that to me years ago he also removed the air to make the point more clearly. Without energy loss to wind resistance the top leg of the line will accelerate dramatically. As the top leg gets very short it's velocity becomes very fast, approaching the speed of light just before the loop opens completely. That would break off some flies! Wind resistance increases exponentially with line velocity, as top leg speed tries to increase WR largely prevents it. The straighter the top leg the less exposure to WR. Noel's calculations showed that straight top leg loops actually do accelerate initially but then WR stops that and a velocity equilibrium is reached. Very interesting stuff and clearly shows how good technique and a straight top leg are more important than line speed, to a point. Of course those who can throw a straight tip leg AND throw it really fast are going to win!
Bruce

Yes, Josh is right on the money. Great video! Clearly shows the delayed turnover with rapid acceleration/kick at the end..
Bruce

Noel's calculations showed that straight top leg loops actually do accelerate initially but then WR stops that and a velocity equilibrium is reached.

Bruce,
That is just the reverse of the plots in Lingard note. 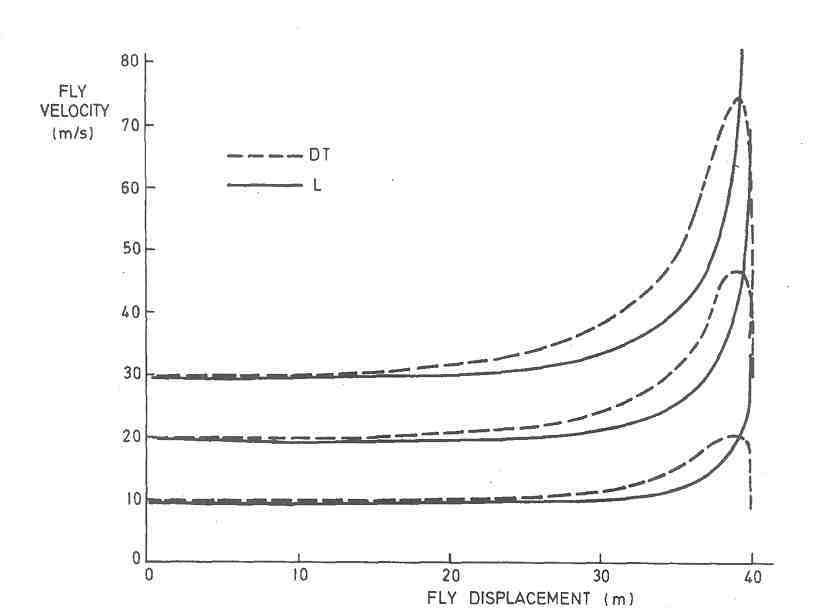 The Gatti-Bono paper looked at what happens with a DT line so it does not make sense that the velocity would increase when the drag losses are near their maximum at the start of fly velocity history.

Unfortunately the skin drag coefficient she chose (.075) to use in her test case was about 15 times larger than the .005 value measured by Gaddis. Consequently I don't think the constantly decreasing velocity profile show in her paper is very realistic. 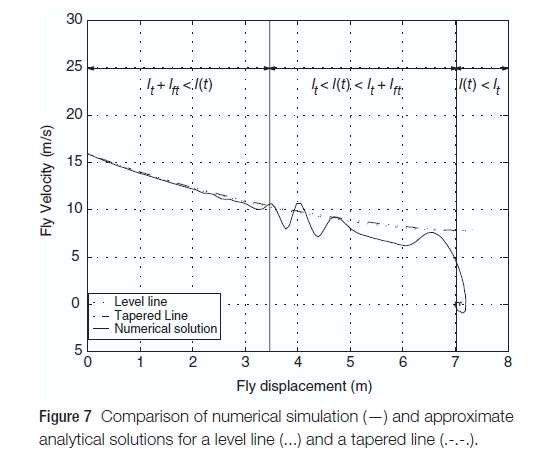 Many thanks to Bruce and Josh for those replies. I feel that those, with Graeme’s sterling work on the other thread, I’m much nearer understanding all this.

"The only advice it is necessary to give the angler… is to avoid any approach to foppery, as trout have the most thorough contempt for a fop…”
WC Stewart
Top
Post Reply
229 posts