but it effects weight because line densities are not constant

In this description of Rio's agent X approach to get the tip of a floating line to float at .http://burfish.com/catalog/agent_x.html they note:

. Most floating fly lines use hollow micro-spheres mixed into the coating to achieve a specific gravity ranging from .83 to .90. Anything lower than .85 is considered a high floating line, ideal for freshwater. However, there is a thinner coating on the tip and the result is that the braided core, heavier than the coating itself, will sink the tip. Worse yet, the braided core will soak up water through the line’s open end making the tip sink even more.

I find the measured mass values (red dots below) of a line match quite well with the values you calculate (blue line) assuming the volume mass density of the line is constant and the line's cross-section is circular, so I would expect the density variation and/or cross-section ovalization are not very significant in practice. 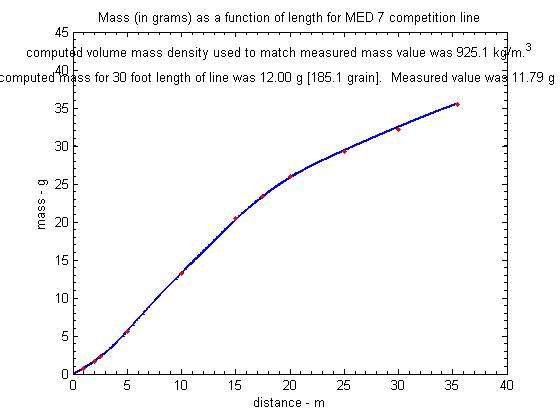 No I don't Gordy! Perhaps diameter measuring is good enough for our purpose but the lines I have measured diameters have been oval and have had quite big differences in short length. I would like to know it is because line machine "nozzle" is difficult to adjust or does the line expand when it comes out. Obviously line comes oval when it is spooled before it has fully set. Quite often the core is not centered at all

I think when the core is constant it can effect the density along the line length especially when core share is high like it is on Trout lines.

How much difference have you found between the cross-section area found for A= pi*min_dia*max_dia/4 of an oval cross-section vs the minimum (or maximum) dia.^2/4? I suspect the difference would not have a big impact on the linear mass density profile that you get.

I find the pressure you use on a micrometer or caliper area can give larger variations than the difference you get in measuring on two different cross section axes. Hopefully the ripple you get due to pressure differences averages out over a large number of measurements.

I wonder if line manufacturers use laser micrometers to eliminate contact problems in their automated control measurements?

Hi everyone - this database is a brilliant project and will be very valuable resource. About 4 years ago I wanted to understand why some of my 6-weight lines cast well and others were lousy. So I weighed and measured them, and I found the weighing method as described above by Lars, was repeatable (using scales weighing to 0.01gram). I did not use a micrometer - as pointed out in some old book by Peter Mackenzie Philps, if you cross the line over itself at a right angle, small differences in diameter become obvious. Take a piece of running line (from the back end) and cross the head over it, then work your way back through the head, away from the front, until you see the head diameter is same as running line - then you have found the back of the rear taper. Likewise you can find the beginning of the rear taper, compared to belly, etc.....my measurements coincided, to within about 30cm/1 foot, with those of the manufacturers who actually posted taper designs on the internet. In fact I compared 9 lines and the differences in tapers were so very gross, anyway, that high precision was not needed by me (but I was not making a public database!). I won't bother you with the raw data since most of those lines are now discontinued. The point was that after doing this quite simple task, I began to understand what general type of line profile and weight suited me (as a modest caster) and the rods. What worked for me? Well, traditional WF with 30 foot heads and short tapers were the worst casters for me and I did better with a DT5 or even 4 than that sort of WF6. I did not like one expensive line with an extremely long front taper, a thick section of about 4.5m at rear of belly, then an abrupt short back taper to thin line. I found it harder to keep stable, harder to carry, and disliked the sudden increase in weight as the head went outside the tip. Most useful finding for me was that taper design makes a huge difference to perception of rod loading. I have two lines, one old one, with a level "long belly" of 43 feet and a short back taper; the other modern one, with a 58 foot head, including a very gradual 20 foot back taper - the heads of both weigh essentially the same (16.2-16.5 gram) but the old one feels like rod goes into major overload (alarming, like the rod might break) whereas with the modern one, rod feels lively and line is easy to control (even though much more line is being carried). So now I look for modern taper designs, with long head, long rear tapers, and correct AFTM weight (if possible) over first 30 feet. Soon I will be able to go to your database and find new lines that should suit me. Best of luck with your database project!
Kevin
Top

I have two lines, one old one, with a level "long belly" of 43 feet and a short back taper; the other modern one, with a 58 foot head, including a very gradual 20 foot back taper - the heads of both weigh essentially the same (16.2-16.5 gram)

Kevin,
What length of line was included in your mass measurements? I don't understand how two lines with the same linear mass density in the thicker head section could have nominally equal mass values for such different lengths..

Have you tried to plot the difference in the linear mass density profile of the two lines? That profile should give a good idea of how the two lines would perform for a given amount of line carry.


Most useful finding for me was that taper design makes a huge difference to perception of rod loading.

I would think that rod loading would depend on the amount of mass that was being carried regardless of differences in the linear mass density profile.

but the old one feels like rod goes into major overload (alarming, like the rod might break) whereas with the modern one, rod feels lively and line is easy to control (even though much more line is being carried),

It would seem to me that the total mass would impact the loading of the rod so if you were able to carry more line without overloading the rod it must have had a smaller nominal linear mass density.

Dear Gordy
I can confirm your arithmetic. The old line (1990s Wet Cel #7) weighed 12.8g over first 30feet / 9.14m = 1.4g/m and carried on being the same thickness until the rear taper set in. The average weight along the 43 feet / 13.1m aerialised head (including rear taper) was 1.23 g/m as you state. The modern line weighed 12.4 g over first 30 feet / 9.14m and then gets thinner, with a long back taper, so as you correctly state the average mass density is 0.93g/m over the aerialised portion. Again, I agree with your statement that the absolute mass carried is the same. If either line was hung statically from the rod tip, I assume the rod would bend the same. My subjective experience was that the modern line, which was of lower average linear density, felt lighter and the rod felt much more lively. I found this same difference in feeling when using either a very slow through-actioned rod, soft for its #6 line rating (that was the one that felt like it might break with the old line) or a much faster rod that I think is accurately rated as #6 (Greys GR50 #6). I can't explain it, either; the different casting feel seems to correlate with the centre of mass of the modern line being further from the rod tip and/or spread over a much longer length of line. I am a very moderate caster and an expert caster might have had a different experience.
Kevin
Top

the different casting feel seems to correlate with the centre of mass of the modern line being further from the rod tip and/or spread over a much longer length of line. I am a very moderate caster and an expert caster might have had a different experience.

Kevin,
Thanks for giving more details about your mass measurements.

"Feel" is a very illusive and person-specific concept. Your comment that a different caster could come to different conclusions on how those two lines felt when casting different distances is no doubt true.

I do think that the linear mass density profile of a line has a big impact on how much line a good caster can carry and thus that profile should be published for every line on the market. I suspect only crude profile drawings are published for propriety reasons, since manufacturers don't want to give away their design secrets.

However as someone at Rio told me it is tough to keep a design advantage for long, when anyone with a with a caliper and postal scale can determine the profile needed to replicate a given line design.

I once saw a fisherman in Alaska who was positioned next to a steep bank and was roll casting as far as I was double hauling. Impressed with his casting I struck up a conversation and found he made up his own lines with no regards to how much the first thirty feet of line weighted. He felt that the linear mass densities of most WF lines on the market were much too small and limited how much line he could carry or snap cast.

Thus I think we could benefit from knowing how the linear mass density of a line varies throughout its length rather than being concerned with the mass of the first thirty feet of line that seems to limit the information you can get from the AFTMA standard.

Gordy unfortunately I have no data to support fly lines nowhere the details you have done. I have calculated some sinking line densities and also heavy floating line densities which I also have took diameters. It is not unusual that ovalization is more than 5% and that diameter fluctuates along the length.

It is not unusual that ovalization is more than 5%

Esa,
How does an ovalization of 5% translate to the ratio of the maximum diameter to the minimum diameter?

If you have the means and patience to take a large number of diameter and mass measurements it is not difficult to determine the rho_l (linear mass density) profile of a line. As Torsten mentioned having a caliper or micrometer that records the data into an Excel spreadsheet is a big plus in speeding up that measurement process.